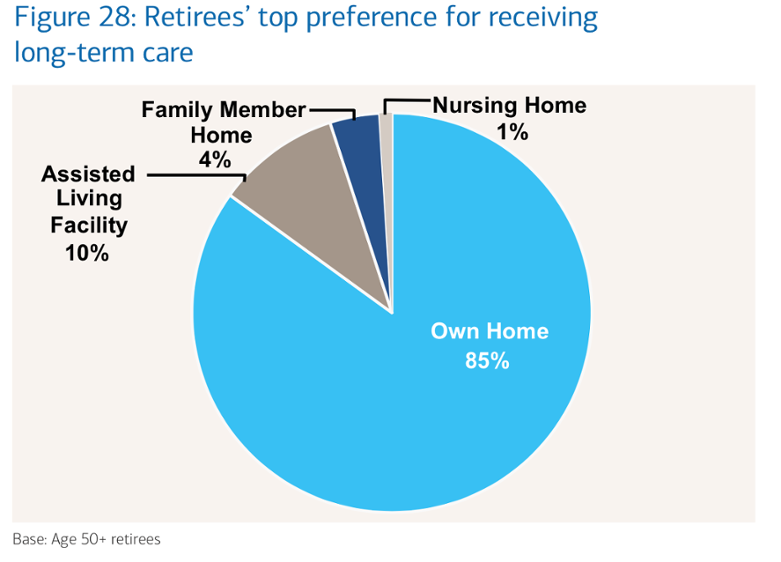 Myhomecarebiz.com shares an incredible blog post about a recent study conducted that revealed some interesting results. 85% of retirees polled said they prefer to age and receive health care in their own homes.  Here’s what myhomecarebiz.com had to say:

Study of Retirees Concludes that Home Health Care is Preferred

A new retirement study conducted by Merrill Lynch and Age Wave polled the preferences of retirees aged 50 or older to determine their preferred long-term care method. The results concluded that the majority chose prefer home health care within their own home as their primary chosen method for long-term health care delivery while aging.

Approximately 85% stated that they would prefer to receive extended care within their home, while 10% stated that assisted living facilities were their top choice. Additionally, 4% chose the home of a family member as their preferred care method and 1% had chosen nursing home care.

“Overwhelmingly, retirees say their top preference for receiving extended care, if needed, is to age in place in their own home. With new technologies (such as telemedicine and remote diagnostics)-, growing numbers of home care providers and services, and renovations to make home more aging-ready, it is increasingly possible for retirees with health challenges to continue living independently at home. In fact, there has been a significant shift in where people are receiving care. The number of nursing home residents has declined in the past decade, while at the same time the number of people receiving care at home has increased.

As boomers enter their later retirement years and the need for all types of long-term care increases, new services, technologies, and options will continue to develop to enable people to receive care how and where they most desire.”

The number of nursing home residents has declined in recent years while the number of home care recipients has increased, much of this could be attributed to new technologies in creating a more “aging-friendly” home… as well as advanced options in receiving home health care. In fact, those 55 years or older account for nearly half of all spending on home renovations- many of these renovations are attributed to adding aging-friendly features such as modifying stairs and other potentially dangerous features.

“As people grow into their later years they don’t want to be forced out of their comfortable home,” Dychtwald said. He noted that especially as people age, moving feels “scary, or unpleasant.”

“Today there are more choices to enable people to remain in their homes as they age,” he said.

[slider animation="slide" slide_time="10000" slide_speed="600" slideshow="true" random="true" control_nav="false" prev_next_nav="false"] [slide]“Thank you so much for ALL of your help. I will be sure to refer ALL THE COMFORT OF HOME to anyone who may need your services. Thanks for providing my Mom with such attentive, caring people.” ‐Renee [/slide][slide]“A+ ‐ A good experience on top of everything, especially this gal here [Janine] who’s been with me for 2 years.” ‐Richard[/slide] [slide]“I wouldn’t trade them in for nothing. I’d have a hard time without them. I’ve appreciated all the professional help and attention and they make me feel like smiling.” ‐Fred[/slide][slide]“You are caring and prompt. I like staying at home because it’s a safe area, close to shopping, medical services, friends and visitors.” ‐May [/slide][slide]“Thank you so much for your services. I can’t tell you enough how pleased we were with the care that you provided to my dad. I only wish you were around 11 years ago for my mom.” ‐Marlene[/slide][slide]“Thank you for taking such good care of my dad. You helped make his last few months very enjoyable and we are very grateful to you all.” ‐Jody[/slide][slide]“All the Comfort of Home has been amazing! They really helped take some of the weight off my shoulders during a really stressful time. I cannot say enough good things about them!” ‐Gwen[/slide][slide]“All the Comfort of Home has friendly and very accommodating staff.” ‐Dee[/slide][/slider]